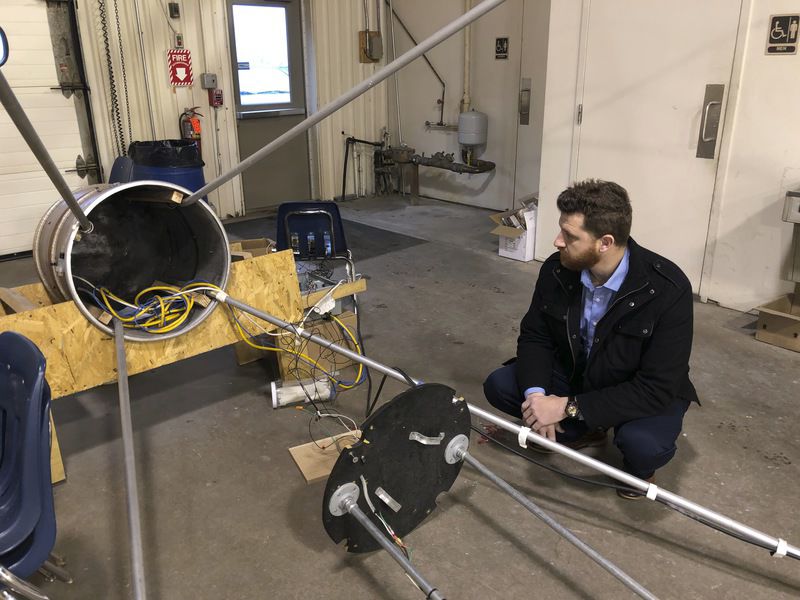 SUNBURY — The 16-foot high, 10-foot wide New Year's Eve Celebration light bulb will be making a return to the city and the updated version has a few surprises.

Thanks to students at Triangle Tech, of Sunbury, the enormous light bulb will shine again in downtown Sunbury during the New Year's Eve Celebration party revived by Mayor Kurt Karlovich. The celebration has been canceled since Jan. 1, 2017.

Karlovich began working with Triangle Tech back in September and had discussed the possibility of the students making improvements to the light bulb.

"I am proud of them all," Thomas said. "This was a big project and everyone did a great job."

Karlovich visited Triangle Tech on Tuesday to see how the light bulb was coming along.

Ashley said he was thrilled to have the chance to add some additions to the bulb.

"We made it so it will have a special message at midnight," he said.

That message, "Countdown in the Downtown, Happy New Year Sunbury 2020, Triangle Tech School," will be displayed at midnight from an electronic sign on top of the bulb, Thomas said.

After a two-year hiatus, Sunbury's New Year's Eve Celebration will return no matter what Mother Nature says, according to Karlovich.

The light is made for outdoor use and has an electronic LED sign on the top, Johnson said.

"The bulb also consists of 5 LED strands, 6 100-watt LED lights in the center of the bulb," he said. "Each LED light that is on the sides of the bulb is 18 feet long and has roughly 124 lights per strip, 120 volts at .25 amperes. They wired all the lamps to the outputs in our Allen Bradley Micrologix 1000 PLC (Programmable Logic Controller)."

Each light is wired through a relay and the to the PLC for further protection of the equipment, Thomas said.

"From that step, they wrote a PLC program to have three different settings for the bulb," he said. "Three input devices, including two push buttons and selector switch. The buttons are wired into a box that will be controlled by the operator of the bulb."

Karlovich said he was thrilled with the work of the Triangle Tech students and thanked them for all the hard work.

"I was so impressed with what the students have done," Karlovich said. "The support they gave us was amazing and I am so thankful for all the hard work they put in."