Triangle Tech is pleased to announce that two students; Jacen Schlott and Ricky Grundstrom from Pittsburgh and DuBois won the MikeRoweWORKS Foundation Scholarship. They each won $10,000! We congratulate these two students on their outstanding award.

The MikeRoweWORKS Foundation, awards scholarships to students pursuing a career in the skilled trades. The MikeRoweWORKS Foundation promotes hard work and supports the skilled trades in a variety of areas. They award scholarships to men and women who have demonstrated an interest in and an aptitude for mastering a specific trade. The Foundation’s focus is on supporting the specific skilled trades that help close the Country’s skills gap and those that represent the significant bulk of our unfilled jobs. The Foundation has participated in more than $2.5 million awarded in scholarships to schools around the country. Triangle Tech is an approved Mike Rowe technical school.

Jacen Schlott graduated from Triangle Tech Pittsburgh in October 2015, with his Associate in Specialized Technology Degree in Carpentry and Construction Technology. Before he graduated he learned about the MikeRoweWORKS Foundation Scholarship and decided to apply. As a result, Jacen won the scholarship! In his essay, he expressed that he felt he deserved to win because he “fit the mold” and wasn’t afraid of hard work or getting dirty.

Jacen said his experience has been good while in school. He has learned things that he might have never learned if he just entered the work field out of high school. He enjoyed that he was able to get different perspectives from his instructors rather than just learned one way from a foreman. Jacen feels the skills he has learned at Triangle Tech will transfer easily into the field. He is most proud of the roof systems he learned to build he learned it the old fashion way, using stick framing with rafters. Jacen expressed that not many carpenters in the field today know how to do this. Although he has experience in the field, he wanted to get a degree to better his employment opportunities and he says “that a piece of paper can really help with employment.”

So far, he has had 3 interviews, 2 job offers and recently accepted a position at TNK. He graduated Friday, Oct. 2nd and started work Monday Oct. 5th at TNK Construction. TNK focuses on high end remolding. Jacen likes this because he said he gets bored easily and at TNK, they’ll be doing something different each day. He believes it will also be rewarding to see what he accomplished each day as well.

Jacen’s long-term goals are to stay with the company. They have been successful for a while and are a family owned company. Jacen feels he can move up the ladder within TNK as well. His goal is to be the lead carpenter.

Jacen’s advice to high school students and counselors is; to look for scholarships, there are many more than you can imagine and they aren’t only for 4 -year colleges.

The second winner of the MikeRoweWORKS Foundation scholarship is Ricky Grundstrom. He is currently in the Maintenance Electricity and Construction Technology program at Triangle Tech, DuBois. He enjoys the small class sizes and the personal attention he receives from his instructors and he feels that is very important.

Ricky advises incoming students and even school counselors to look into this specific scholarship and to apply for as many as you qualify for.

Ricky will be graduating in February 2017. 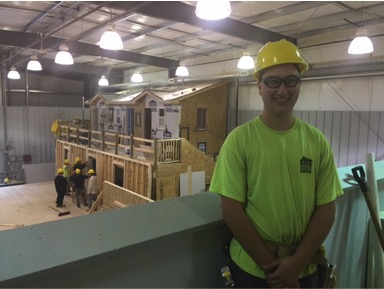 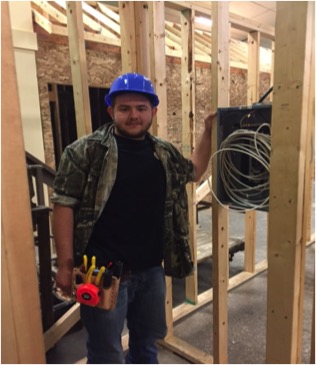